We’re not sure if there’s something in the water recently that is causing people to open conversations in an inappropriate fashion or to respond in a way that is just as bad, if not worse. Here’s a little guide on the best ways to respond to certain situations, how to determine whether it is okay to issue an unsolicited private message, and some other useful information. If you decide to bring a situation to network staff, be aware that any bad reaction you’ve had is not suddenly okay because the other person “started it” by PMing you.

If you don’t feel like reading this entire thing, the tl;dr version is that both parties need to take personal responsibility for their actions, stop being self-entitled about talking to people, and use functions and available help to solve the situation without dragging admins in. Be safe rather than sorry and ask in-channel if you may PM beforehand. If the unsolicited PM is in direct violation of the network rules, then staff will intervene immediately once it is reported. Otherwise, it is in your best interests to read this post in full — if a situation arises regarding unsolicited PM, “I didn’t know” is not going to be a valid excuse.

Generally, private messages that are both unsolicited and unwelcome range somewhere between the following, if answered:

Obviously, one is much more polite than the other. Our very first recommendations for avoiding and/or reacting to unsolicited PMs are these:

Granted, it can get a little annoying when you’re in the middle of something and the same people keep sending messages over and over again, but that is the nature of IRC or any other place open to the public in some fashion, and we do have some serial offenders.

We recommend doing one or more of the following before opening an unsolicited query to a new person:

If you still refuse to take personal responsibility for your actions and PM people anyway without asking OR you do not clearly indicate that you do not wish to receive PMs without first being consulted, there are only certain circumstances where the network staff will intervene:

Our usual solutions, partially mentioned at the beginning of this post, if we have to intervene are these:

We have two exceptions to us not intervening on a first offense:

If you have any questions, as always, please /join #help and ask away.

Many of us live our lives half-offline, half-online. The degree to which we form relationships between the two realms is personal choice. […]

We’ve implemented a system for adding your channel’s events to the Cuff-Link Events Calendar. There is a form located at our support […] 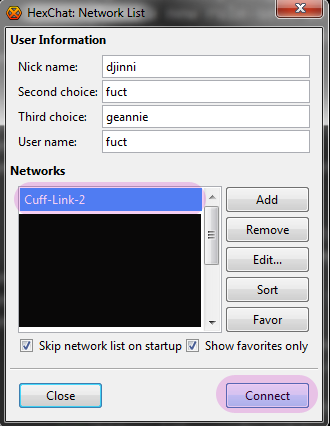 While this is specifically for setting up SASL on Cuff-Link using HexChat, this tutorial should work for any network that offers SASL […]

Hello, We have finished updating the network to InspIRCd 3. InspIRCd 2 is end of life beginning June 2020 after a decade. […]