It’s been a while since we’ve done a staff Q&A for the benefit of the users, but we figured it’s time again.

Among answering whatever questions you want, any subject allowed, we are tossing around ideas to implement a couple of features as well, so we’d like to use the announcement of a Q&A session in #cuff-link to also get your input and views on whether we should bother with the new features. But first!

One is something called “oper prefix”, which would give opers a special symbol next to their names in all channels. We would probably use a * to signify this.

Some users have expressed that it’s difficult to tell who the opers are at any given time at a quick glance, and this would allow them to do so. However, we cannot pick and choose which channels it’s displayed in, and while one or two clients Just attach the symbol and would put us in the userlist based on whatever our actual status on the channel is, most clients would put us at the top of the list, as you see above in the second image.

Oper prefix is an all or nothing signifier of who we are without you having to /whois. The caveats are that users may confuse us for chanops, which we don’t want, and would work to make sure everyone knew that all it meant was that we are network staff and that we cannot be kicked from channels. Owners and chanops would have to ask us to leave if they’d prefer we not be present [which is what we expect now as it is, but you can /kick us if you wish].

The other feature that we have been thinking of offering is the “commonchans” user mode onconnect. This would prevent anyone outside of a common channel with you from sending you a PM. Unlike +g, which prevents others from sending you a private message without you sending the /accept +nick command to the servers, you would not be forewarned and asked to allow the person. This also means that if you wanted to use the mode, people you talk with regularly who may not sit in the same channels as you would not be able to get through, since it’s an all or nothing mode as well.  Note: this mode is already available using /mode yournick +c if you would like to try it. Keep in mind that if we put this as an onconnect mode, you would then have to shut if off using /mode yournick -c command.

We’ve set up a poll to ask whether you want one, both, or neither of these features, and you can find it here: https://goo.gl/forms/SA9miTSlhJDPOsxP2 [will open in new tab, or should, and you must be signed into Google in order to respond to the poll so we can have a modicum of control over people only responding once, but to protect users’ identities and make it as anonymous as possible, we have shut off email address and username collection.]

Please comment below as well. We’ll be checking both the poll and the comments prior to the Q&A on the 27th.

***NOTE:After the results of the poll for the common channels module we will hold a second poll during the Q&A to see if there is interest in providing that mode on connect with the option to remove it yourself much like the current set up for hiding your channel list from other users.

Hello, We have finished updating the network to InspIRCd 3. InspIRCd 2 is end of life beginning June 2020 after a decade. […] 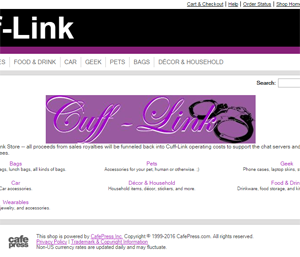 We decided to make a CafePress store for anyone who would like to have something with the Cuff-Link logo. There are tons […]

Hello! It has come to our attention that we don’t do nearly enough with the website. This is mostly approving accounts and […]