If you’re looking at this, then we have directed you to this post for some reason.  We have written tutorials for some of these, and we are working on more.  Since we don’t use every client, if your favorite adds one of these features, let us know!

The basic information:  you’ll need to know a couple things when setting up most of the clients below.

That’s the bare minimum; but of course if you have your nickname registered, all of the recommended clients will specifically have a box to save that for auto-identification.

Most clients we’re listing here, by default, have SSL, SASL, and some include SSLfp support.  A couple quick definitions:

If there is something you’re in love with about one of these, ask us, we might know of a modern alternative that is actually easier to use.

These clients are semi-common but not preferred:

We will not assist with these clients. 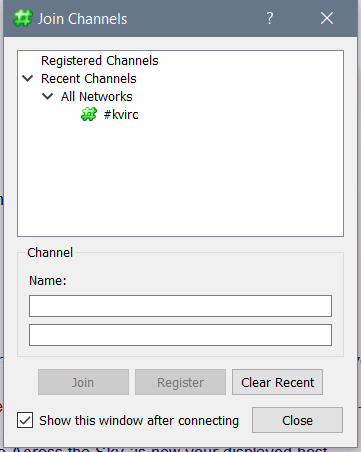 KVIrc is a multi-platform client that is popular with scripters.  This howto is based on 4.2.0, the current stable version, and is […]

We made a recent DNS change to how our authentication bypass system works. For those of you currently using port 7797, you […]

We switched to InspIRCd this week from UnrealIRCd, so there are a few changes on the chat servers. Most of these will not […]